New Land, New Life, tells the inspiring firsthand stories of five refugees from the Horn of Africa who’ve settled in Australia and made a new life for themselves in a new land.
NB subtitles can be viewed by switching on the captions button on the bottom menu bar.

New Land, New Life was funded by the Department of Immigration and Citizenship under the Diversity and Social Cohesion Program.

More videos are available on the Harda YouTube channel 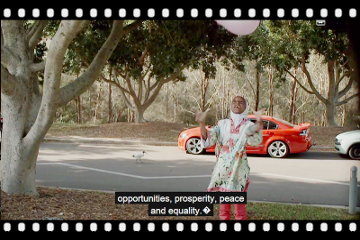 After 12 months of planning, research & filming, HARDA released its new documentary titled New Land, New Life. The premiere of this exciting film was launched by THE HON BRENDAN O’CONNOR, Minister for Immigration & Citizenship on Feb 20th. It tells the inspiring stories of 5 refugees from the Horn of Africa, all who have undergone great hardship yet made successful new lives here.

FEW people can say they drank water squeezed from grass in a dead elephant’s stomach to survive. Or wielded an AK-47 before picking up a pen… Deng Thiak Adut can… ‘Survivors grab chance’-SMH News.

(Photo by Sahlan Hayes of Deng Thiak Adut, who is now a lawyer in Australia)
(Funded by DIAC under The Diversity & Social Cohesion Program; Produced by Michael Power, Afterglow Productions)

From refugee to captain: Thomas Deng set for starring role for Australia on Olympic debut - https://olympics.com/tokyo-2020/en/news/from-refugee-to-captain-thomas-deng-set-for-starring-role-for-australia #Tokyo2020 via @Tokyo2020

The plague is not a beautiful thing but something can be retrieved even from the worst of circumstances | Nyadol Nyuon https://www.theguardian.com/australia-news/2020/aug/09/from-the-wreck-of-the-pandemic-we-can-salvage-and-resurrect-an-inner-life

This is a great story about how Sudanese Australians can mobilise effectively to support South Sudan as it continues to struggle with conflict 10 years into its independence.
https://www.sbs.com.au/news/how-south-sudanese-australians-mobilised-to-help-their-homeland-achieve-independence-from-afar?dlb=[2021/07/09]%20del_newsam_bau_02&did=DM991&cid=news:socialshare:twitter via @SBSNews

Australia's first parliamentarian from the South Sudanese community sworn in https://www.sbs.com.au/news/i-made-it-here-australia-s-first-parliamentarian-from-the-south-sudanese-community-sworn-in?cid=news:socialshare:twitter via @SBSNews

Congratulations to Fiona Carr whose tireless work for HARDA was recognised by Inner West Council last night. She was one of 18 volunteers to receive awards. Her efforts have been crucial in making our flagship employment program JAMP so successful.

From refugee to captain: Thomas Deng set for starring role for Australia on Olympic debut

Thomas Deng is relishing Australia's return to the men's football tournament at the Olympic Games for the first time since 2008, and will lead the nation
View on Facebook
· Share

New restrictions announced today with specific impact on those living in the Fairfield, Canterbury-Bankstown and Liverpool LGAs. Please share with any of your communities living in those LGAs. Stay safe everyone!New rules in place for Greater Sydney including the Central Coast, Blue Mountains, Wollongong and Shellharbour until 11.59pm on Friday, 30 July:From 11.59pm on Saturday, 17 July:• Retail premises will be required to close (‘click and collect’, takeaway and home delivery can still operate), except the following can remain open:- Supermarkets and grocery stores (including butchers, bakeries, fruit and vegetable stores, liquor stores and fishmongers);- Stores that predominantly sell health, medical, maternity and infant supplies;- Pharmacies and chemists; - Petrol stations;- Car hire;- Banks and financial institutions;- Hardware, nurseries and building supplies;- Agricultural and rural supplies;- Pet supplies;- Post offices and newsagents; and- Office supplies.•In addition to the current stay-at-home rules, residents of Fairfield, Canterbury-Bankstown and Liverpool LGAs (local government areas) cannot leave their LGA for work except for emergency services and healthcare workers (including aged and disability workers). Where those workers from Fairfield LGA do need to leave their LGA for work, they are required to be tested every three days, even if they do not have symptoms• Anyone who leaves the home must have a mask with them at all times. They must be worn when you are working outdoors, in outdoor markets, outdoor shopping strips, and in an outdoor queues waiting for products such as coffee and food; and• All carpooling to be stopped unless among members of the same household.From 12.01am on Monday, 19 July:• All construction to be paused; and• Non-urgent maintenance, including cleaning services, and repair work on residential premises to be paused.From 12.01am on Wednesday, 21 July:• Employers must allow employees to work from home if the employee is able to do so, failure to do so can result in a fine of up to $10,000.All other restrictions currently in place across Greater Sydney including the Central Coast, Blue Mountains, Wollongong and Shellharbour will remain in place. Restrictions in regional NSW remain unchanged.We understand this is a difficult time for the community and appreciate your ongoing patience. More information will be available later tonight at: www.nsw.gov.au/COVID-19 #StayHomeNSW ... See MoreSee Less