HARDA has had a long involvement in youth programs with the HARDA Outreach Programs central to one of our flagship programs. The first of these was run in 2011/12. It encouraged young Somali participants to develop their leadership skills through sporting and community activities.

These programs involved running soccer programs for youth, which were linked to mentoring and workshops, organising soccer tournaments in partnership with Auburn soccer club, going to Melbourne with youth teams to participate in the Australian ‘Africa Cup of Nations’ and running a large Youth Employment and Careers Expo in partnership with the Muslim Student Association. Some of these are detailed below. 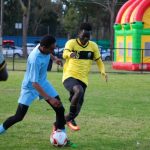 2017/8 African Youth and CALD Soccer Tournament and Community Festival (July 15, 2018) - This program took place between Oct 2017 and Dec 2018 and was held in partnership with ANSA & Auburn Sports Club. It involved weekly soccer games, mentoring and leadership workshops. This culminated in a soccer tournament with 16 teams representing various African communities in Sydney, involving about 300 players. Read more 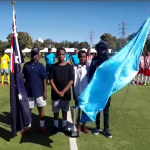 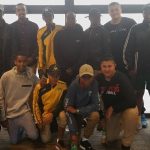 2016 African and CALD Youth Mentoring Outreach Program (September 5, 2016) - HARDA, in-conjunction with Auburn Sports Club, again ran its successful African and CALD Youth Mentoring Program for African and CALD youth from the Western and South-Western Sydney region. This program was initiated due to the lack of access to culturally appropriate mentoring, health and sporting workshops, which we believed was a major barrier for newly arrived refugees, migrants and CALD youth. HARDA successfully engaged with young African and CALD participants to develop a leadership/mentoring program with the support of the local community elders, youth centres and law enforcement agencies e.g. NSW Police and the AFP. These were run alongside weekly… Read more

Harmony through Creativity project (November 30, 2013) - This youth engagement project was run in partnership with Football United sponsored by UNSW and funded by a grant from the NSW Government Community Relations Commission. The main event was a 3-day camp at the YMCA, Springwood from 29 Nov 2013 to 1st Dec 2013. 38 young persons of both genders and multi faiths took part in team building workshops and various sport activities. It was very successful and while a lot of fun was had by all the participants, it also fostered social integration and increased mutual understanding. Read more 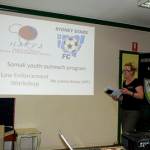 Building Community Resilience – Somali Youth Outreach Program 2011/12 & 2012/13 (October 4, 2013) - This very successful program was run for the second year by HARDA & Auburn Sports Club and supported by the Attorney-General’s Building Community Resilience Program. It encouraged young Somali participants to develop their leadership skills through sporting and community activities. The activities were supported by the local community, youth centres, law enforcement agencies and locally based organisations. This program, funded by the Federal Attorney-General’s Department and actively supported by the Australian Federal Police, was one of most successful that HARDA has ever conducted. Much of the credit for this must go to HARDA’s former President, Mohammed Omar, whose brain child… Read more

Youth Employment and Careers Expo and Mentoring Program (October 30, 2010) - This joint venture with the Muslim Student Association was launched with the Expo on Saturday 24th July 2010. The Expo was an outstanding success, attended by more than 700 young people and supported by volunteers from professions, trades and numerous organisations and agencies, including TAFE, the ATO and the NSW Police service. More than fifty students and job seekers subsequently participated in an ongoing mentoring program. The project was completed with a presentation of certificates to mentees in November Read more

Girls Social Justice DSR Camp (June 30, 2008) - This camp was conducted over three days at Milson Island, for thirty girls from the Horn of Africa Countries living on Western Sydney. The girls were aged between fourteen and nineteen. The aims of the camp were to promote social coherence, skills, harmony and unity, to develop a sense of community, of belonging, to build leadership skills and to present an interactive program on women’s health and rights. Post camp evaluation indicated that the goals had been met and that the camp was very successful, with all the girls and wonderful volunteers much enjoying it. This camp was sponsored by … Read more

DIAC Boys Camp & Community project (March 30, 2008) - The five day residential program was conducted at the Mangrove Mountain Camp and attended by  thirty eight 15 to 18 year old youths from the Horn of Africa countries living in Western Sydney. It was designed with specific aims and objectives for the boys such as the promotion of social coherence, harmony and security and the development of a sense of community responsibility and leadership skills.  It was followed by the community service program at the Exodus Foundation’s ‘Loaves and Fishes’ canteen. The Project was funded by a grant of $18,000 from DIAC who were provided progress and final reports… Read more

The Auburn Football Cultural Diversity Project (October 30, 2007) - This program was about developing and refining soccer skills and a sense of community. Leading soccer coaches volunteered their services, uniforms and equipment were purchased and a junior soccer club identity was established. The program was funded by DIAC under the Living in Harmony program and supported by the NSW Department of Sport & Recreation and the Auburn Council. Read more