The Executive Committe and Members of the Horn of Africa Relief and Development Agency acknowledge and pay tribute to our founding president, Hassan Omar.

Hassan Omar arrived in Australia in August 1983 on a scholarship from his motherland Somalia. As soon as he arrived up until his untimely death on 11th March 2009, he worked tirelessly to help others, building bridges between Australians and his fellow Africans from the Horn. As President of HARDA, and in every action and deed, Hassan lived the life of a true humanitarian.

His commitment to his ‘brothers and sisters’ in Africa and Australia was legendary. He was never daunted by ‘people in high places’ and would always pursue his agenda at every opportunity.

Together with this commitment to ‘the cause’ was a dedication to lifelong learning and growth, not just for himself but for countless others that he pushed to achieve. In 1985 Hassan received his Postgraduate Diploma in Ecosystem Management from the University of New England. He continued his studies and gained a Certificate of Interpreting Preparatory Paraprofessional level, a Certificate in Community Welfare Work and a Diploma in Community Welfare Work in rapid succession. These qualifications were in addition to the Diploma in Animal Science and Range Management and the Certificate in Wildlife Management earned by Hassan back in Africa.

In 1993 he established the Horn of Africa Settlement Group which helped to settle more than twenty families from the Horn of Africa. Hassan also started the Somali Community Association and the Ogaden Relief Association to help the troubled people from the Ogaden region of Ethiopia. He was the founder of the Voiceless Children’s Network and an active executive member of the African Communities Council. In 2003 he founded HARDA and was president for five years to 2008, then Director of Overseas Aid in 2008-2009.

He is survived by his wife Kathy and four children – Deeqo, Aden, Jamaal and Salah.

A Tribute to Paul 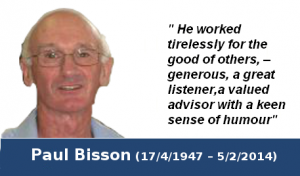 Everyone was deeply saddened and distressed by the sudden death of Paul Bisson on 5th February. Paul came to HARDA as a volunteer soon after he retired following a forty year professional career as an accountant, including many years as Finance Director and Chief Financial Officer for Hawker Pacific Pty Ltd. He started his career with Price Waterhouse in the UK and then in Malawi.

He joined HARDA’s Secretariat where he was designated as our finance officer and filled the position of Treasurer on the Executive Committee. Paul was a gentleman in the true sense of the word, a fine and good man who worked tirelessly for the good of others – generous, a great listener, a valued advisor with a keen sense of humour. He was a consummate professional who was greatly admired by everyone in the HARDA family and the wider community, especially by members of the African Australian communities. We are richer for having known him.

A Tribute to John 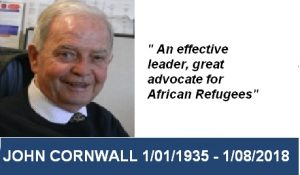 On the 26th of September 2018, Family members, volunteers at Harda and members of the African Communities gathered at the Edmund Rice Centre to celebrate the life of John Cornwall who passed away on August 1, 2018.

From 2007 to 2014, John volunteered as either Harda’s President or as its Executive Director. John was a great advocate for African Refugees who have resettled in Australia and he was responsible for many initiatives that helped their integration in their new land. He was also an effective leader and appreciated by Harda’s team of volunteers and community leaders from the Horn of Africa. He also found time and energy to acquire funds to underpin projects to alleviate poverty in Africa.

He will be sadly missed.