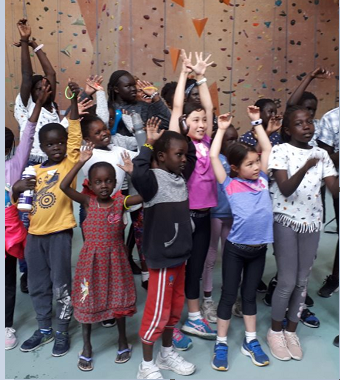 This year’s program started in October with a day of indoor rock climbing in Villawood. The participants were paired up and either belayed each other or took turns climbing and encouraging each other.

The second session in early November was a day of laser tag & bowling which all the kids much enjoyed. It was great to see them working together in mixed teams. As normal the final session of the program, one greatly looked forward to by the kids from our communities, took place at Coogee Beach in conjunction with the Coogee Surf Lifesaving Club

Following sand games and a traditional Aussie sausage sizzle lunch, the parents and kids were given an introduction to surf and beach safety. Afterwards all the kids went down to the beach for water fun and safety training with the Surf Lifesavers. We are very appreciative to the Coogee Surf Lifesaving Club, and particularly to Doug & his group volunteer lifesavers.

This year the program sessions were run with shorter intervals of 2 weeks between each, which really helped facilitate better relationships between both groups. It has been great to see many of the kids really connect over the course of the program.

Our thanks to Kids Giving Back for hosting the program and the volunteers from both organisations who made it a success.